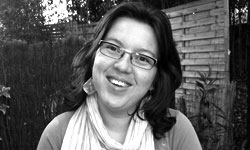 As a food engineer, she worked two years in a veterinary lab in charge of improving food safety in collective catering. Attracted by multidisciplinary and multicultural dynamics, she was involved in the European research project AFTER (African Food Tradition rEvisited by Research. 2010-2014). Vice-coordinator based in Dakar during the last two years of the project, she was in charge of the demonstration and dissemination activities. She developed her expertise in research project management and communication.

Keeping close relationship with research thanks to her last collaborations (i.e. with Cirad and Inra), she focused on one main objective: to make the results of research understandable for all (scientists and non-scientists) and easier to be implemented, e.g. by SMEs and other industries.
Mathilde’s main focus will be on the ROMEO and the XERIC projects but she will also be involved in other international projects.